Leave some water in the well.

It’s a great idea: stop work­ing when you’re writing your best and it’s easier to start writing next time. You leave the work excited to return. You only face the dreaded Blank Page in the middle of your writing session, fresh from a success.

I found the same goes for Coding, albeit for different reasons. And, as a coder, I created a silly little script to help me with that. 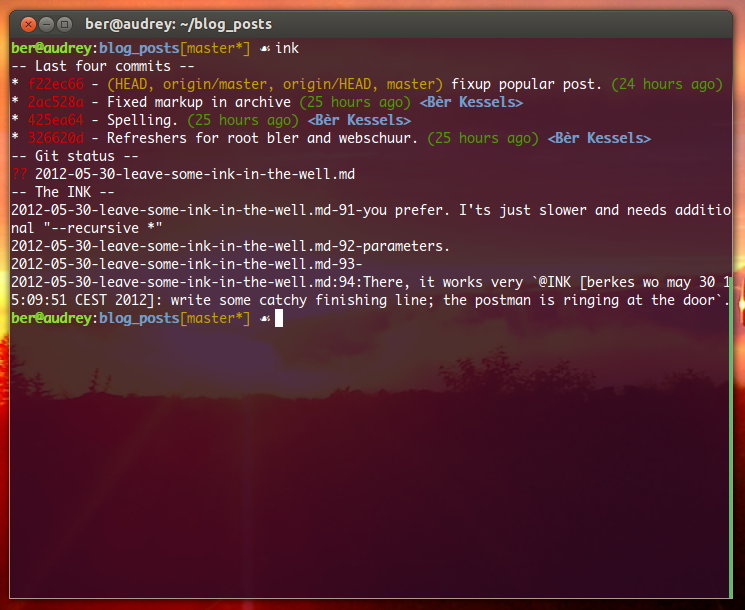 I get disturbed a lot, during work, anyway. When finally you have mapped the entire stack of some weird application in your brain, your phone rings, alarms for some server start blinking, or you get some new twitter reply. Woosh, the effort is lost; the energy put into mapping everythin in your brain: wasted.

But even more often you have planned interuptions. Such as the end of the day, lunch, or some meeting.

You have many projects intermingling.

Ideally, as a programmer, you work on one problem at a time. Lucky people work on one technology, in one environment with only one language and toolset.

Luckily I don't, because that would bore me to death. I love working on multiple projects simultaneaously. Most of us do, if the average github commitlog is any proof.

So, you are working on some problem in, say, Drupal. And suddenly your time is, up, or a more urgent, say, CSS-issue needs solving. Or some server configuration needs sorting out, because backups or builds are failing.

What do you do? Commit the unfinished state? git stash it? just leave it as it is?

You could leave some ink in the well. Using a simple @INK marker.

A simple '@INK' with a comment. @INK is a different marker then @FIXME or @TODO. Actually, @INK is also a TODO.

Then, whenever you pick up a project, you look for the @INK, have your aha-moment and can jump right in where you left.

The only problem I have with this, is when you get disturbed, you often don't have the time to dump your thoughts and mental-state into such a comment. But telling the person behind you to "wait a sec till I finish this sentence" is not too strange.

And with a simple script, you can find your ink in the well:

It gets some context with two git commands, one to render a short, pretty git log, to learn what you did last, before you left the project. The other to show the changes in the repository: uncomitted, changed and removed files and such. And the last shows you where you placed the @INK marker, with a few lines of context.

Instead of ack-grep, you can use grep if you prefer. I'ts just slower and needs additional "--recursive *" parameters.