Last summer I started a sideproject. Post-a-Coin. A simple and straightforward idea, really: you can buy high quality postcards with Bitcoin preloaded to give as a gift. For the crypto-nerds: a paper wallet, really1.

I envisioned it as a small side-project: a tiny company that makes some revenue to keep itself running, but which, above all, helps to put bitcoin into more hands. 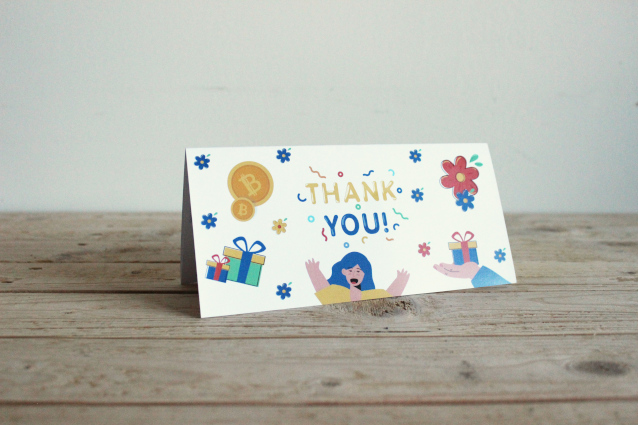 This autumn, I decided to stop rolling it out. To kill it off.

The reason is the draconian Dutch implementation of the European AMLD5 directive, which is certainly going to solve the "rampant problem with money laundering with cryptocurrencies /s".

This law is the Dutch interpretation of a European guideline, but the Dutch version goes far further than what is required by the European directive.

Here, the Dutch Central bank will to perform the supervision over all companies dealing with cryptocurrencies: custodial wallets, exchanges, services, etc. This law was supposed to activate today, January 10th 2020, but has been postponed because of bureaucratic reasons, not because it is a bad law, but some technicalities with a debate in the House of Representatives being cancelled last year.

Don't get me wrong, I consider it a good thing when governments step up and try to protect the society they represent, with laws. I consider it Good For Bitcoin, when our government decides to supervise the companies that deal with bitcoin (or any other cryptocurrency). If recognition and supervision by a government can fix the bad reputation of Cryptocurrencies, then by all means: Implement it!

Whenever I mention Post-a-Coin to family, friends or others unfamiliar with the crypto-world, I get a reaction that includes the words "Criminals", "Paedophiles" or "Ransomware". Sometimes all three. Not having to fight that perception would help Post-a-Coin a great deal.

If that supervision is implemented well, it will show the world, and Joe-average, that those supervised cryptocurrency-companies are serious, well-run, law-abiding companies. And not some dark-web-criminals putting ransomware on your PC or selling childporn.

The problem lies in the implemented well, though. Because the Dutch supervision will not be implemented well. At all! (Dutch twitter thread highlighting all the democratic and legal issues with this implementation).

I'm aware of at least one other company stopping its business due to this law.

For me, for Post-a-Coin, the problems with the law are five-fold: It is expensive, complex, unfair, will result in monopolies and be wholly ineffective:

It is expensive. How much each supervised company has to pay, is unclear, but just the fee one has to pay to be supervised is going to cost a lot. Numbers like €150.000 or €77.000 per company, per year, have been going around. For certain is that "the supervised group of companies" have to pay the entire costs of that supervision themselves.

My company, selling a fifty-odd Bitcoin-postcards a month, will certainly not be able to pay such fees. I would need to turn it into a company that will rival the likes of Hallmark, just to be able to pay those kinds of fees. And even if that were realistic, I don't want to grow into the CEO of one of the largest postcard companies in the world: I want it to remain a nice sideproject.

Edit: the Central Bank gave a final cost-specification. I missed that, eventhough I'm on a mailing list AND asked them about this several times, they failed to contact me about this final spec. In any case: €5000 for a request for registration (and it looks like you have to pay, regardless of whether they will register you in the end). Following years are unknown and deemed to be more expensive, because that is when "the niche" needs to cover the entire costs of all the registrations themselves.

It is complex. I'm running this company from a shared office space. It is a just a Sole Trader entity (Eenmanszaak in Dutch). As a tiny startup, it makes no sense at all to set up an LLC entity (B.V. in Dutch) with a board of directors and such. Yet this is required. Not by letter in this law, but everything in the legal documents assumes a large company with HR-divisions, Director of Risk and Compliance, boards of directors and so on.

At a meeting with the Dutch Central Bank, I asked them about the procedure in which they will review the people on the board of a directors, a requirement by that supervision.

The answer was telling: "Your HR department will need to write a document about each director of your company". I could buy myself a box of different hats, one with "HR" written on it. And then write those document myself. It shows how disconnected an institute like the Central Bank is with the world of small companies.

They simply cannot envision companies being small. Understandable: up to a few years ago, all they dealt with, was supervising a handful of large banks. Supervising 20-odd of the biggest multinationals in The Netherlands is entirely different from supervising several hundreds of startups who are inventing weird stuff with new and hard-to-grasp cryptography in monetary systems. Like postcards that hold Bitcoin.

In order to comply, I would, basically, need to enlist Risk and Analysis people just to comply with the regulations. Not because the (growing) business needs them. Complying is actually really easy here. I know the risks, and am 99% certain that I'll catch a terrorist trying to send a bitcoin-loaded postcard somewhere. I'll know immediately when you are using this service to launder money (and will think you are a really dumb money-launderer for using such an inefficient mechanism to launder your money).

It is unfair. A larger company can very easily just move outside of The Netherlands. Technically, any company operating in The Netherlands has to register, but if they don't, there's nothing in place to force them.

So any company with enough legal personnel on board, will just continue operating from Malta, Panama, Ukraine or whatever letterbox-setup they can afford. But moving my entire business (Me, a laptop and an offline printer) to Panama is a ridiculously heavy move, just to sell some postcards.

It won't achieve what is tried to be achieved: Those looking to set-up exchanges or other crypto products in a shady or gray area of operation will still be able to do so, as explained above. Only those with good intentions are hit by this supervision. I assume and hope that the benefits for those participating outweigh the downsides, because otherwise this law will certainly achieve the exact opposite. The well-intended players will be outperformed by those who circumvent these laws. Because those who evade the laws operate far cheaper.

It makes monopolies: All above, show that after the law activates, we'll have a large barrier-to-entry for new companies. I don't blame the current Dutch exchanges or hold anything against them.

But they are the ones benefiting from this in several ways, while making it far harder for their competition to grow and accelerate. The existing exchanges benefit from a shakeout and a high barrier to entry, if only because it gives them less competition to worry about.

I really liked the idea of Post-a-Coin.

But with such laws coming to place, the Dutch government forces me to close my company. Before I'm legally required to apply for registration at the Central Bank, I'll close down the shop.

Another startup killed by bureaucrats trying to control a niche with rules and laws.

^1: And yes, dear crypto-nerds, I know this is "insecure". I've seen your private key on that card, because I will print it on the card and cover it with a neat scratch-off-sticker. You only have my dearest and sincerest promise that I'll delete them. Which, in my opinion is good enough security for a $25 gift. Which is also an important reason that this product cannot and will not be used to launder money: it is technically completely unfit for that.